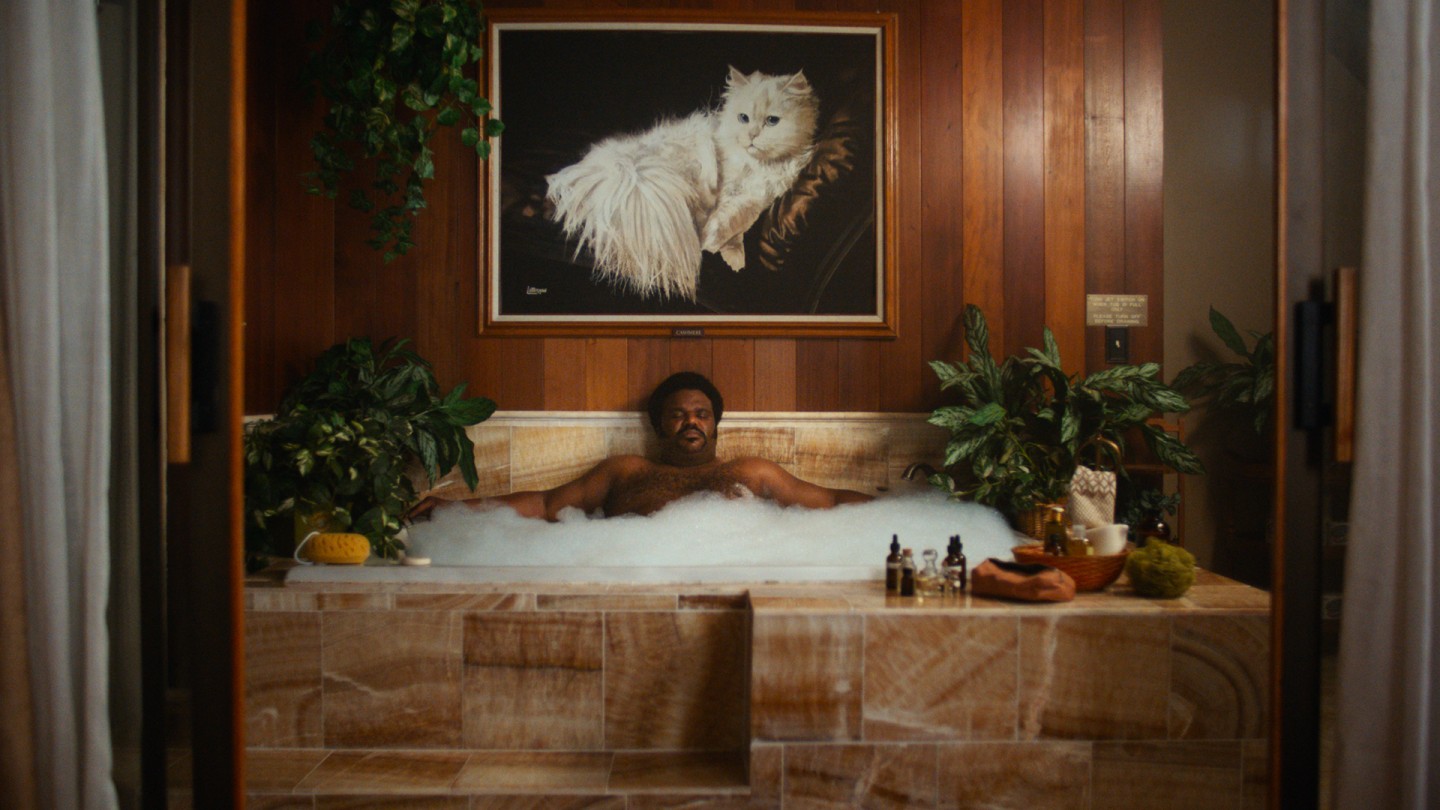 Interview: Jim Hosking on An Evening With Beverly Luff Linn and The Greasy Strangler

Jim Hosking’s darkly comic follow up to The Greasy Strangler, An Evening With Beverly Luff Linn, is an absurd comic tale of love, loss and hotel entertainment from a mysterious plaid-clad man. Film4 Online’s Stephanie Watts spoke to Jim about working with the cast, where his ideas come from, and the perfect movie snack.

This film has a huge comedy cast. Did you write any of the parts with actors in mind?

I suppose a couple of the actors in the film I kind of had in mind a little bit. But it’s more of there being something like an actor that I cling onto in my mind while writing. So I might think about Aubrey Plaza in a certain way while I’m writing the script, but I’m not looking to create a sort of stock Aubrey Plaza character, if you know what I mean.

Many of the actors have pre-defined comedy personas. How was it working with them to fit the tone of Beverly Luff Linn?

It’s definitely an interesting process. I think that they all want to do something different to what they’ve done before, but they probably go into every film that they make with that attitude. I do encourage them as soon as we speak that I want them to go somewhere else with what they’re doing. I know that Aubrey wanted to do something very sincere and emotional and dramatic; she didn’t want to play a comedy performance that people would be familiar with. And with Jemaine [Clement], who is often just a very funny, quite understated sort of comedy presence, I just wanted to push him a lot further and have him get very emotional and take him to a different place. I’m just trying to create something different with all of them, I suppose.

The ideas in your films seem to almost come out of nowhere. Was there anything you grew up watching or listening to that you think may have helped shape your worldview?

I do think about this because I think it’s strange that I do make these kinds of films when I don’t watch anything remotely like them. I don’t watch comedies, I watch serious stuff and emotional films and sad films, I’m much more drawn to sad, human kinds of films. Maybe that’s just how I am as a person, and then when I make stuff, I need to have a release, so then I make this other stuff where I can take the lid off everything that I might suppress otherwise. Maybe it’s quite a British thing as well - I think that we hold a lot of stuff in, and then it comes out with people getting really pissed at the weekend or in the comedy that we like being quite extreme or absurd. And so when I’m making films there’s that kind of English thing, you think of Monty Python or old comedy like The Young Ones, or even Alan Partridge or Chris Morris, it’s making people feel uncomfortable or enjoying other people’s awkwardness or tragedy.

How did Andrew Hung end up working on the soundtracks to your films?

I just heard some of his solo stuff that I really liked. He made this EP that sounded almost like videogame music, but it seemed really good for The Greasy Strangler. One of my cousins is in a band and has a recording studio and Fuck Buttons recorded their first album in the studio, so I got in touch with my cousin Tim and said, “Could you give Andy Hung a shout?” I think he knew him on Facebook or something, so that’s how that happened. But the soundtrack on this film is really different to the soundtrack on the other one, this one sort of feels more orchestral, and quite powerful.

Did you feel like the filmmaking process was different from The Greasy Strangler?

The Greasy Strangler felt like it was completely chaotic and sort of lawless; working with a load of unknown actors making very perverted strange material, it was like anything goes. It felt like this was much more of a serious endeavour as far as filmmaking is concerned. I was working with established actors who wanted to know why they were doing things or why certain things were happening, rather than me just saying “Do that, no do that” and prodding at people like in The Greasy Strangler. I really wanted the actors to have the time they needed to deliver the performances that they wanted, and it’s very difficult with independent films because you have very little time and every day is a real challenge to get everything you need. I love being involved in some challenge where it feels like I have no safety net. But it’s definitely quite nerve-shredding after a while. By the end of Luff Linn I was really exhausted. If you think I’m skinny now, you should’ve seen me at the end of that one!

Where did you find Michael St. Michaels, who plays Ronnie in The Greasy Strangler?

I wrote the script for Beverly Luff Linn about a year before I made The Greasy Strangler, and when I wrote the Luff Linn script, my first instinct was to cast unknown people. So I did a bit of casting in L.A. and I came across Michael St. Michaels. He read for the part of Rodney Von Donkensteige, who’s played by Matt Berry. And then when I was casting The Greasy Strangler, it was all very dark and intimidating, and that was just not where I wanted to go. I wanted to make something that was kind of quite sweet and endearing and innocent. And then I remembered Michael and thought “God I wonder if he’d do that?” He said “I’ll do absolutely anything, I just want to get out of the house.”

The Greasy Strangler is playing on Film4 on Saturday night. What snacks do you recommend people get in to watch it with?

Probably those circular sausages, what are they called, Cumberland sausages? I don’t eat sausages though. But they can eat whatever they like.

The Greasy Strangler is on Film4 on Saturday 2nd June.